Day and night, fast and slow! Beautiful valleys including the Chalke with the odd hill thrown in; plus Cheddar Gorge, maybe in the dark with its looming walls. Stunning views en route, you may just see The Needles…

Route notes and a variety of navigation files will be available usually the Monday before the event. Use the interactive map for an overview of what lies ahead (subject to change); toggle the elevation & grade on/off by clicking the key. *Please note plugin's 'grade' is experimental so take it with a pinch of salt.

Heading out from Warmley Station along the Bristol to Bath Railway Path and through the 2Tunnels under Combe Down you will make your way into Wiltshire and cruise down the amazing virtually traffic free Wylye Valley, which the still operational GWR Wessex Main Line follows to the historic town of Wilton with its Italianate Church. Hopping over to the Chalke Valley, named after a small tributary to the River Ebble emerging at Broad Chalke, you head towards Shaftesbury after a couple of climbs; the first onto Charlton Down on a section of old Roman road between Bath and Badbury Rings, here you may see on the horizon The Needles if a clear day. Descend the infamous Zig-Zag Hill to Shaftesbury. Using predominantly B roads from now you head to Wells, here the road named Strawberry Way follows what was once the old Strawberry Line named after the local produce. Level riding through Somerset to Cheddar and its mighty Gorge, most likely in the dark with its looming rock faces, you ascend The Mendips to the Chew Valley and the arrivée at The Holybush Inn, Bridgeyate.

Public toilets should be open from 06:30. The car park is now short stay only! Please do not park at The Holybush Inn; people live there and don’t want to be woken at the crack of dawn by cyclists scrabbling to unload bikes, also they’d like to reserve the car park for their regular trade. As Warmley is ideally located on the Bristol to Bath Railway Path I’d hope all those coming from Bristol and even Bath cycled to and from the event.

A great route starting out along the cycle path from Warmley, by frozen and iced up railway engines. The route was great and took us on a real mix of lanes and side roads. Mainly rolling hills and lumps to begin with. Well organized controls and cafe stops made all the difference. The 2022 ride was really cold, down to -5 at the start, so I kept stops to a minimum and tried to keep some body heat going. I was ridng solo, so went at my own pace, and it was a great atmosphere among all of the riders, which it invariably is in the depths of winter.
There are a few of “Will’s hills” in the last 30k or so, with Cheddar Gorge as a warm up, then a couple of super sharp but short hills before popping out somewhere near Keynsham, via some beautiful out of the way villages.
There were a few busyish roads in the route, around Wells and towards the very end, but that was probably just in comparison to how quiet the rest of the route was. A great way to spend a January Saturday on the bike. 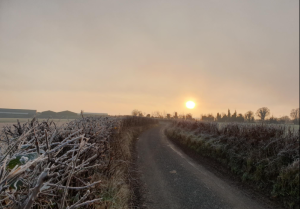 On a cold windswept day in January I chose this as my first audax of the year. It was great fun riding this one, some roads I was familiar with and others not. The ride out from Warmley station on the Bristol to Bath cycleway was nice and then onto the two tunnels trail emerging from the second tunnel into daybreak.
Once over the Mendip hills it was gentle rolling countryside through into Wiltshire with a stop at the Ginger Piggery for coffee on the way to Wilton. Heading west there was a few more cheeky hills as we crossed into Dorset including a climb up onto Bullbarrow down that tested the legs. Onwards west we rode into somerset with another of Will’s hills just after Bruton and then finally after a dash across the levels we ascended Cheddar Gorge. I was one of those that climbed it in the dark which added an interesting twist. But don’t thinks it’s all downhill back to Warmley as there was a couple more Will’s hills thrown in at the end.
On the whole it was a great ride, would I do it again? Most definitely yes!

Bookings are yet to open or have closed